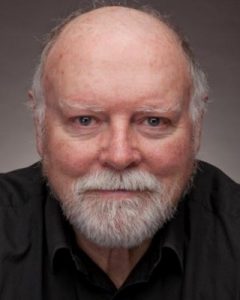 Clive’s profile on the website of his agent, The Nolan Muldoon Agnecy:

Clive joined the Irish Army Air Corps when he was 17, he left in 1965 and joined the Abbey Theatre as an actor. He left shortly afterwards to freelance, re-joined the Abbey in 1971 at the invitation of the Artistic Director, Leila Doolan. He has worked on radio, television and film, but his main occupation has been on stage as a member of the Abbey company. He has toured extensively with the Abbey, to the U.S., Australia, the U.K., France, Germany and Finland.

Clive most recently played the title role in Hugh Leonard’s DA directed by Dan Gordon at the Olympia Theatre, Dublin. His recent Abbey theatre credits include Sir Charles Marlow in SHE STOOPS TO CONQUER, SAINT JOAN, SHE STOOPS TO FOLLY, MACBETH, PHILADELPHIA HERE I COME!, OBSERVE THE SON’S OF ULSTER MARCHING TOWARDS THE SOMME, HUBERT MURRAY’S WIDOW all directed by Patrick Mason, A WHISTLE IN THE DARK directed by Conall Morrison, ARISTOCRATS directed by Ben Barnes, Stanislaus Gregg in KATIE ROCHE, THE HUNT FOR RED WILLIE directed by Mark Lambert, James Walsh in DOWN THE LINE directed by Lynne Parker, SOUR GRAPES and THE PLAYBOY OF THE WESTERN WORLD  directed by Brian Brady.

Clive Geraghty – An Klondike from Nolan Muldoon Agency on Vimeo.